Hugging the shoreline of Moreton Bay, Wynnum (4178) is about 15 km on the Eastside of Brisbane city. Despite its location, Wynnum could not be considered a beach resort because of its mangroves and mudflats which make it completely unsuitable for swimming. Instead, there is a water park with wading pools and man-made beach.

Development in Wynnum was delayed until the advent of rail in the 1880s at which point it then took off, with the council being declared in 1902. Now Wynnum has 3 railway stations with regular services accessing Brisbane and Cleveland. It also has several primary schools and 2 public high schools.

Wynnum has always prided itself upon its close-knit community village atmosphere. Recently, population pressures and changing demographics have driven urban development resulting in an interesting mix of traditional, modern housing, commercial and retail use. However, Wynnum strives to preserve its heritage by recognition of half a dozen sites.

In 2011, Wynnum was home to some 12,000 people with an average age of 40 years. Residents are primarily of Anglo- Australian descent from Australia, England and New Zealand and there are very few second languages spoken at home other than English e.g. Tagalog (0.5%). 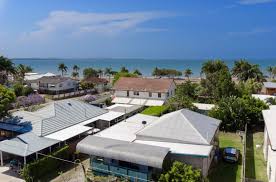