If you are buying or selling in Ipswich we can provide a number of different Building Inspection Reports depending on your current needs such as:

Noted for its architectural, natural and cultural heritage, Ipswich actively preserves more than 6,000 historical sites. Originally a mining colony in the 1820s, Ipswich was intended to be Queensland’s capital but Brisbane was chosen instead because of its port capability for ships. Ipswich was discovered by Captain Logan, Commandant of the Moreton Bay penal colony in 1826 when he discovered large deposits of limestone at the head of the Brisbane River. Prior to this, it had been home to numerous indigenous groups.

The town began as a limestone mining settlement, emerged as a major coal mining area and grew rapidly as a major inland port for expanding coal and wool industries and a regular paddle steamer transport service from Brisbane. This was replaced by road and rail transport with the construction of the Albert Bridge spanning the Brisbane River at Indooroopilly. Named after a town in England, Ipswich became a municipality in 1858, later to be proclaimed a city in 1904.

Ipswich is particularly recognised for its historic buildings which range from Early Colonial/Victorian to Queensland Bungalow. However, because Ipswich is the fastest growing area in south-east Queensland, traditional buildings are increasingly being challenged by modern high-density multi-dwelling developments in award-winning master planned communities. 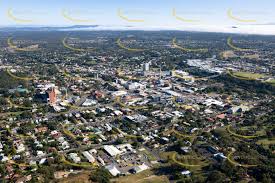