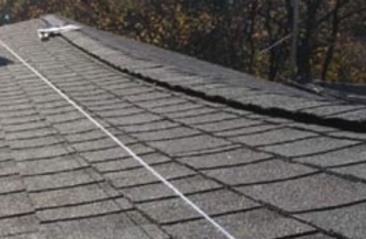 The Glossary of Building Terms, SAA FIB 50 describes ‘deformation’ as a change of shape of a structural member or structure, resulting from the applications of load(s). In addition to deflection, deformation includes any plastic, non-recoverable movement. Common symptoms associated with deformation include sagging, springiness, buckling, unstableness or even collapse.

Widespread sagging is visible where roof coverings have dished and ridge lines are bowed over strutting points commonly resulting from:

Symptoms in the form of localized sagging around the eaves, resulting from excessive cutting of rafters to fit over wall plates orexcessive cutting or removal of roof framing members for installation of services.

Distortion and lifting resulting from failure of galvanized roofing nails with movement of the sheeting caused by wind pressure or uplift, or deterioration of the fixing battens from timber pest attack.

Cracking and horizontal movement with inadequate resistance to lateral loads due to:

Many walls, masonry or concrete, fail over time or begin to bow. This problem is often caused by too much lateral pressure from soil outside, but also can be a result of an inadequate original design. Poor drainage, uncontrolled water, poor waterproofing and over compaction of the soil can also cause walls to bow or fail.

Water pressure is one of the most common causes for cracking and bowing concrete. As hydrostatic pressure, it can push upwards, or push laterally against a wall.

Oversaturated ground around the base of a building may be due to bad or malfunctioning gutters or downspouts; a high water table, broken pipes or lines in the street or yard; dense clay that holds water, or just an area with a lot of rainfall!

Trees and some bushes can grow roots that exert huge pressures on foundation walls especially as tree roots can grow as far away from the tree as the tree is tall.

Various building practices such as building in a hurry to meet tight schedule commitments so foundation concrete has insufficient time to cure, building in unfavourable conditions, lack of preparation and poor materials to name a few, may create issues later on.

Time breaks down just about everything especially when effects of settling, shifting, expansive soils and outside pressures are added.

Foundation footers may be built on loose material. It might expand or contract over time because of the weight on it, or soils may be reactive and move. In any case, settling results from the shifting and the result is cracking.

Loose backfill that has been placed around the house can also settle and exert extra pressure on the walls, creating the same problem, especially if that backfill is comprised of lots of dense clay materials.

The coatings put on the walls can break down over time, allowing water to come in contact with the concrete. Once that happens, the water begins to affect the strength of the concrete. At that point you might begin to see discolorations, water, cracks, or even bowing of the walls.

Shrinkage comes from the curing of the concrete or mortar. As it shrinks, cracks develop, usually along mortar lines, but sometimes in the form of vertical cracks. Once there is a crack it is weaker than the surrounding wall, and that leads to the possibility that pressures from outside will begin to bow that wall.

Horizontal cracking at the base of the wall results from:

Sagging or springiness of floors underfoot is commonly due to:

Sagging or springiness of the floor or even cracking of the ceiling due to: