An outer suburb about 18km south of Brisbane. Although subject to exploration when Brisbane was a convict colony, farming of its rich soils wasn’t undertaken until 1865, initially by Irish migrants. The 1960s saw an upsurge of interest in the area and intense residential development as a result of the efforts of several local builders who were responsible for establishing entire estates.

Rochedale is well serviced by several state schools and a large private college as well as public busways and major road transport routes, the Pacific Motorway and the Gateway Motorway.

Rochedale is perhaps best known for its waste operations which generate electricity but have also been the source of much controversy and debate.

During convict settlement, explorers passed through the region but it was not until 1865 that the first settlers started farming the area’s rich alluvial soil. Noted for its natural bush land, State Governments have sought to preserve its fauna and flora by setting aside protected corridors. However, from 2009, Brisbane City Council has approved the conversion of Rochedale’s remaining bush and farmland into housing estates which means that Rochedale’s resident population is expected to undergo significant rapid growth over the next ten to fifteen years.

In 2011 the population of Rochedale was recorded at about 1,000, with an average age of 43 years. 35% were born overseas, especially in England, New Zealand and Taiwan, with the most common second language spoken at home after English being Mandarin (1.5%). 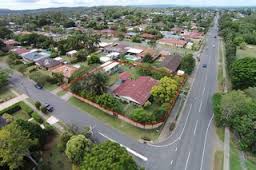