About 35 km south-east of Brisbane, Redland Bay (4165) sits on Moreton Bay. Initially settled in the mid-1800s, its fertile red volcanic soil favoured prosperous farming of sugar cane, pineapples and vegetables such as tomatoes. The rich soils also encouraged rainforest growth of red cedar which formed the basis of a strong logging and timber milling industry in the area. Timber produced was used in architraves, fretwork, doors, skirting boards and other finishing elements in early homes. Redland Bay farmers continued to adhere to their traditional lifestyle and resist the approaches of land developers. It continued to be a fishing and farming community until land rezoning drove a steep rise in rates making the local farming unviable.

Advances in transport also made it more accessible to Brisbane and attractive for development, thus encouraging subdivision of farms with the greater influx of new residents. By 2000, very little remained of Redland Bay’s farms. Redland Bay also serves as a port of access to the mainland for ferries and other small vessels sailing to the islands in Moreton Bay. Hence, Redland Bay is the lifeline connecting island residents who choose to enjoy the relaxed subtropical island lifestyle but still need access to vital mainland facilities. Redland Bay is well serviced with a major shopping precinct.

In the past, Redland Bay operated as a port for flying boats travelling from Sydney to England or ferrying tourists to the Whitsunday Island resorts. However, with the advent of more advanced long-haul aircraft i.e. DC4s, Lockheed and Boeings, flying boats became obsolete in the mid-1950s and the base in Redland Bay was finally closed in 1971.

In 2011, about 13,500 people were living in Redland Bay, with an average age of 37 years. Residents are primarily Anglo-Australian, having been born in Australia, New Zealand and England with English being the sole language spoken at home. 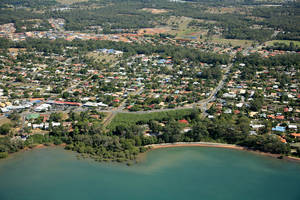