Was derived from the name of a 1970s housing estate and is situated some 10km from Brisbane on the Eastside. However, it has been settled since the early 1800s by loggers and farmers.

Carindale is well serviced by various public busways accessing a network of major roads feeding into the Gateway Motorway. It also has several private and state schools, a golf club, a private hospital, parks and bushland reserves, and perhaps what it’s most known for; Brisbane’s largest shopping centre accommodating over 400 stores and food establishments and anchored by Myers, David Jones, Woolworths, Coles, Aldi, Target, Big W and a cinema complex.

To cater for ageing residents, Carindale also has a number of nursing homes and private mixed level care campuses. The prevalence of large expensive homes suggests that residents are a middle to upper socioeconomic status, although recently there has been an inflow of younger families and professionals and a resurgence of higher density building in the form of apartment blocks up to about 8 storeys.

According to the 2011 census, about 15,500 people call Carindale home. The average age of residents is 40 years. About 32% of residents were born overseas, especially in England, New Zealand and South Africa (about 10.5%). However, a mix of second languages are spoken at home; namely, Greek, Cantonese, Italian, Afrikaans, and Mandarin. 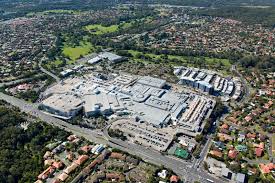