Powderpost beetles mostly attack during the first 6 to 12 months of the service life of timber. As only sapwood is destroyed, large-dimensional timbers in a house are seldom weakened significantly to collapse. In small dimensional timbers, the sapwood may be extensive, and its destruction may result in collapse. In flooring and joinery, the use of sapwood susceptible to powderpost beetles is an offence in Queensland. Replacement of affected timbers is the preferred treatment.

The female lays her eggs only in the exposed end pores. In pines these are too small to accommodate the eggs and are therefore immune to attack. The larvae that hatch from the eggs feed on starch in the sapwood. After several moults, the larvae are fully grown and then come close the wood’s surface to pupate. Powderpost beetle larvae are identifiable by the presence of enlarged spiracles on the last segment of their abdomens. The beetles then emerge about 20 days later through round holes. The dust ejected from the flight holes is fine and flourlike. The heartwood does not contain starch and is immune to attack. Beetles live about 3 to 6 weeks, mate and lay eggs in the end pores of hardwoods. Generally, the life cycle lasts 4-12 months but depends on many factors. They fly readily and spread rapidly to other susceptible timbers. 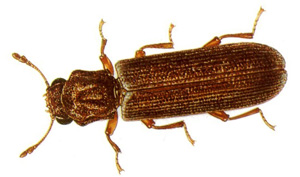 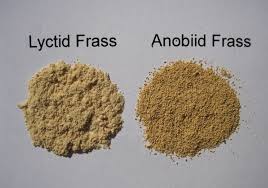