This beetle is responsible for instances of flooring collapse. Pine timbers are favoured and while sapwood is preferred, the heartwood is also attacked. Hardwoods are rarely attacked. Attack by this beetle is usually observed in timbers that have been in service for over 20 years and mostly involves flooring and timber wall panelling. Its attack is seldom seen in roofing timbers because it is heat and low humidity sensitive.

The female lays her eggs in cracks, abraded areas and old flight holes. The larvae tunnel mainly in sapwood, moving close to the surface to pupate. The beetles emerge through round holes similar to those of the pinhole and powderpost beetles. The life cycle usually takes 1 to 3 years with the larval stage variable depending upon climate and food.

Furniture beetle larvae are distinguishable by the absence of enlarged spiracles on the second last segment of the abdomen. The dust from the flight holes is fine and gritty and much coarser than that of the powderpost beetle. Wood attacked is often honeycombed with much of its structure destroyed, sometimes resulting in collapse with weight placed upon it.

Replacement using a resistant timber, composition board or pre-treated wood is mostly the best approach to infestations. 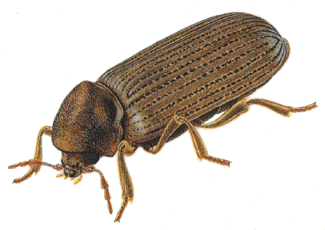