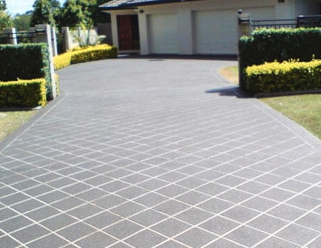 The basic function of residential pavements such as driveways, paths and patios is to provide safe, easy access onto and around a property. Pavements between kerb and gutter and property boundary will have to comply with local authority requirements with respect to levels, grades, thickness, reinforcement and concrete strength. These in turn may affect grades and possible need for transition zones for remainder of the driveway, especially on steep slopes.

For adequate surface drainage, recommended minimum grade or crossfall for a pavement is generally 1:100 or 10mm per meter. Maximum grade should not exceed 1:20 in the footpath area or 1:4 within the boundary. Where grades steeper than 12.5% are necessary for driveways of vehicles with low ground clearance, a transition zone at either end of the steep section may be required to prevent vehicles “bottoming out” on the driveway.

Stormwater drainage system should ensure that there is no ponding deeper than 10mm on the surface 15 minutes after cessation of rainfall. Where pavement cannot be graded away from a house, a suitable drain should be provided to divert stormwater runoff.

Presence of trees adjacent to pavement may cause soil movement especially with expansive clays that change ground levels and result in cracking. Tree roots may extend under paving to cause slab lifting.

Where driveways and pavements are constructed adjacent to houses:

Majority of concrete used in residential pavements is “normal” class concrete with a minimum strength of 20 MPa.

Use of steel reinforcement or mesh does not increase the load capacity of the pavement or affect its thickness. Its primary function is to hold tightly closed any cracks that may form where the amount of reinforcement required will depend upon the thickness of the slab and joint spacing. For footpaths which typically have closely spaced joints up to 2m with little risk of cracking, either no reinforcement or an SL52 mesh is appropriate. For 100mm thick pavements with joints spaced further apart (up to 3m), a minimum SL62 mesh would be appropriate.

There are 2 types of joints in pavement:

Concrete pavement will not bridge over a poor subgrade. All topsoil, vegetation debris and other foreign matter should be removed. Any poor, saturated, highly compressible or otherwise weak areas should be removed and replaced with suitable subgrade or roadbase material which is adequately compacted in layers to prevent settlement. All service trenches and other excavations should be similarly backfilled. On highly expansive clay subgrades, significant volume changes may result in non-uniform slab support and potential slab failure. The function of subbase is to minimise moisture migration under pavement and attendant moisture content and soil volume changes. A 100mm thickness is generally recommended for a non-expansive subbase layer.

Providing polyethylene sheeting or a 20mm thick layer of sand beneath the pavement is an effective way of reducing friction between slab and subbase so that the concrete slab is able to move freely with thermal volume changes without cracking.

Reinforcement mesh should be located within the top half of the pavement and have a minimum of 30mm concrete cover to the top of the slab. It should be fixed in position with suitable supports spaced at 800mm centres to prevent sagging of reinforcement during concrete placement. Where mesh sheets are joined, they should have a minimum overlap of two cross wires.

Where excess water has been added to the concrete mix, drying shrinkage may result in widespread cracking and less resistance to surface abrasion and wear caused by traffic. Rapid drying of concrete may cause surface flaking and loss of strength due to inadequate curing.

Adequate compaction of the concrete significantly reduces its porosity, increases its strength, enhances abrasion resistance and general durability and minimises risk of cracking. For slabs on ground up to 100mm thickness, adequate compaction can usually be achieved through placing, screeding and finishing processes.

Residential pavements for foot and light vehicular traffic should be cured for a minimum of 3 days increased to 7 days if located near the coast or subject to heavier traffic. Curing allows the concrete to achieve its potential strength and durability.

If cracking does occur over time, it is important to identify the cause, and then accept whether the cracking is acceptable i.e. up to 0.3mm wide. Cracks wider than 1mm should be assess on an individual basis in terms of possible effects on durability and performance requirements and, depending on the surface texture and finish, also on aesthetic requirements.