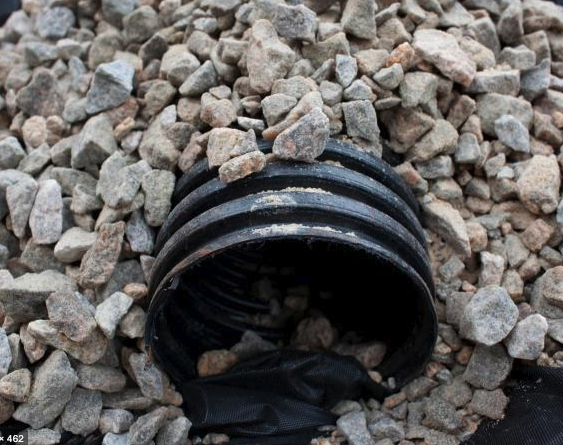 If voids are created in the ground they tend to fill with water. Also the static loads on any subterranean structure such as foundations as well as retaining walls can be massively increased by the presence of water in surrounding ground. Land drains are introduced to relieve this pressure. Traditionally, the drains were created by backfilling behind retaining walls etc. with rubble and allowing the water to drain through the rubble to some suitable point.

Many modern land drains are created utilising rigid or flexible plastic pipes pierced with holes, laid in pea gravel. Holes or gaps have to be left in the pipes to allow water to transfer from the subsoil to the pipe and these tend to block with soil or allow silt into the pipe, so blocking it or reducing the flow of water. This can be partially overcome by surrounding the pipes with gravel. However, with time even the gravel becomes choked with soil/silt, so in the latest practice, the gravel is surrounded with a geotextile material which filters out soil particles. Ideally, land drains are laid with access points so that high pressure water jetting is possible to clear silt. However, whatever the technology, all land drains have a finite life and eventually become ineffective due to the ingress of silt and/or the blocking of the surrounding filter media.