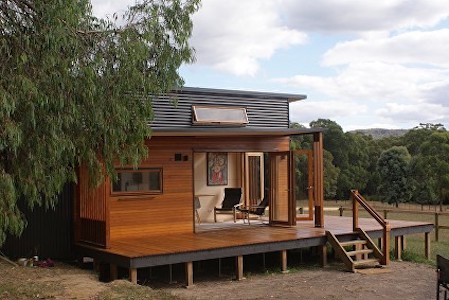 Imagine if you could live mortgage free. According to Heather Shearer of The Conversation (November 5, 2015), Australian families are doing just that by building tiny homes on wheels that measure just 10 square metres or 7m long by 2½m wide… for less than $40,000.

From students to professionals and retirees, a growing number of Australians have given up ever being able to buy their own home, put off by runaway prices and huge mortgages, or the downside of living far from family or employment. This affordability problem is much broader, extending to the lack of affordable rental. And even for those living the dream, a sudden interest-rate rise, job loss or chronic illness could rapidly turn it into a nightmare.

All 25 major urban housing markets in Australia are ranked as severely unaffordable; and according to the International Monetary Fund’s Global Housing Watch, June 2015, Australia has the second most unaffordable housing market among member nations of the Organisation for Economic Co-operation and Development (OECD).

Australian houses are also among the largest in the OECD. In 2008, the average new house was 214 square metres, double the size of an average 1950s house according to the Australian Bureau of Statistics and Commsec. Very large houses are not only more expensive, but environmentally unsustainable; the bigger and more isolated the house, the larger its greenhouse gas emissions with average Australian houses emitting 18 tonnes per household a year according to the Environment Protection Authority.

Against a similar backdrop, the tiny house movement originated in the United States in the late 1990s, in response to problems with housing affordability, spurred on by the global financial crisis and a widespread desire to live more sustainably. The movement has spread to Canada, New Zealand, and now Australia. The Tiny House Australia Facebook page has about 15,200 followers.

Tiny houses tend to be smaller than 40 sq m, and can take many forms, from granny flats, to repurposed shipping containers, to complete houses built on trailers. Their benefits include sustainability, reduced energy and water use (many are “off the grid”) and affordability. They use significantly less resources to build, and are often constructed from salvaged materials or sustainably sourced products, with rainwater collected from the roof, stored in water tanks, composting toilets, and solar power.

Melbourne architect Wesley Spencer believes that with the rise of the cost of living, people were looking for alternatives. He argues that bigger is not necessarily better. Space does not equal comfort. He says “homes are getting too big, isolating the people who live in them, even from themselves”. Instead, “tiny houses gave the opportunity for giving up the rat race and inviting opportunities to see the country we live in”. By rejecting consumerist lifestyles and going back to basics, people are now choosing to create a more meaningful life.

However, there are loopholes to jump through in Australia. Although information is plentiful on building techniques, plans and design and building a tiny home may be relatively easy and inexpensive, the biggest problem is finding a location. Buying land requires a significant investment in itself, and different councils have different regulations around what constitutes a dwelling, what planning approvals are required, and how land can be used.

Tiny houses do not conform to many local government planning schemes or building codes, which mandate minimum house sizes, maximum number of houses per plot, connection to utilities, parking provisions, and restrictions on temporary occupation.

Anyone proposing to build one should seek advice from the Statutory Planning Department. Separate to a planning approval, these dwellings also need to meet building approval by complying with building codes and standards.

A tiny house is often built on a trailer: the width must be 2.4m to fit on a road and 4.3m high to fit under bridges and lights, but could be 7m long. The trailer must be registered and comply with roadworthy certifications. Also there are strict rules where they can or cannot be parked. As a movable building, they may be placed on sites with differing building conditions. This means that the building needs to be fitted to endure the worst case zoning requirements, which might be difficult to cater for.

Tiny houses may not be for everyone, but a niche market, more suited to those who are childless or retirees.